An underlying goal of this campaign is to provide a framework that other GMs can build on. Not that Barael's Europe will be devoid of detail—rather, it should have just enough for GMs to expand on in whatever way feels natural to them.

I'm limiting myself to the following source material:

Swords & Wizardry Core Rules (4th Printing)
This is my first campaign setting using S&W, and to give it a fair shake, I plan to use it pretty much by-the-book (UPDATE: scratch that--I'll be including my house rules here and there, as they're developed). This will speed things along and also help me identify what areas are in need of tweaking for my next campaign (IOW, no need to preemptively "fix" anything until I decide it's "broken"). One caveat: since I'm limiting myself to the 4 Core classes (cleric, fighter, magic-user, and thief), I may inject some sort of "career paths" to help define specific character roles. There may be some minor table tweaks (e.g., the "to-hit" progression for each class, which is non-uniform and seems to give magic-users more punch than I think I like at first blush), and definitely some equipment updates (e.g., no plate mail).

Penguin Atlas of Medieval History
By Colin McEvedy, this book is a great summary of medieval European History. Each page is a map of Europe, covering topics such as language, religion, trade routes, barbarian invasions, etc. For our purposes, we need only the first 20 pages or so (i.e., up to 528 AD), but the capsule overview provides plenty of information for campaign use—at least enough of a springboard to other research if the GM desires. (affiliate link) 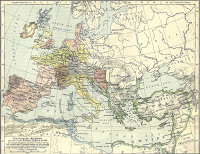 Shepherd's Map
The cartography that started it all. The image at right is a cropped version of the original, showing only Europe (I ditched the two maps of England, essentially because they depicted different time frames). I don't expect to do much alteration on the map. In general terms, coloured areas are "civilised," while white areas are terra incognita, populated by barbarian peoples and terrible monsters. Place names will remain, just to avoid mucking about with the map labels. Due to the detail shown, this is obviously for GMs' eyes only, and I'm sorely tempted to create a Hexographer version for players.

Zak and Jeff
Two blog posts will guide my planning:
I have some ancillary references, but they're area-specific. For example, Ian Malcomson's "Dark Ages" article from DRAGON #257 has some good period info for Anglo-Saxon Britain; Udi Levy's "The Lost Civilization of Petra" explores a great ruined city/dungeon complex, and Barnes & Noble's "Book of Saints: A Day-by-Day Illustrated Encyclopedia" will no doubt prove valuable for religious background within the campaign. I'll reference them as needed.

Next up, let's take a closer look at Shepherd's map.
Listening to: Joe Jackson, Night & Day